I’m extremely happy to say that I’ll be taking part in two Movement Electronic Music Festival (OFFICIAL) Pre-Parties this year! One in my fine city of Dallas, Texas and the other in my second home of Brooklyn, New York. I’m unbelievably honored and humbled to contribute to two events with such amazing talent from around the globe as a precursor to the iconic event in Detroit, Michigan.
1. A collaborative effort in Dallas from STEREO ON STRIKE, Red Light, and SOURCE 20/20 as we bring you a man that needs no introduction, the legendary Andrei Morant at Official Movement Pre-Party – Andrei Morant, Convextion, James Kelley, Wanz Dover for my birthday celebration!
2. I’ll be making my 7th appearance in recent years in my home away from home Brooklyn, New York. This time for some of my best friends in the world Aphotic at Official Movement Pre-Party – Aphotic 2 Year Anniversary ft. Terrence Parker, Inner8 Uun, John Templeton, Justin Schumacher, James Kelley, and Littlz
In other news, my live recording from Beta Nightclub in Denver, Colorado at Techno Diva Parties monthly collaboration with P.U.N.C.H.I.S. Friday’s was just picked up by a MAJOR podcast and will air in just a few short months! Details soon… 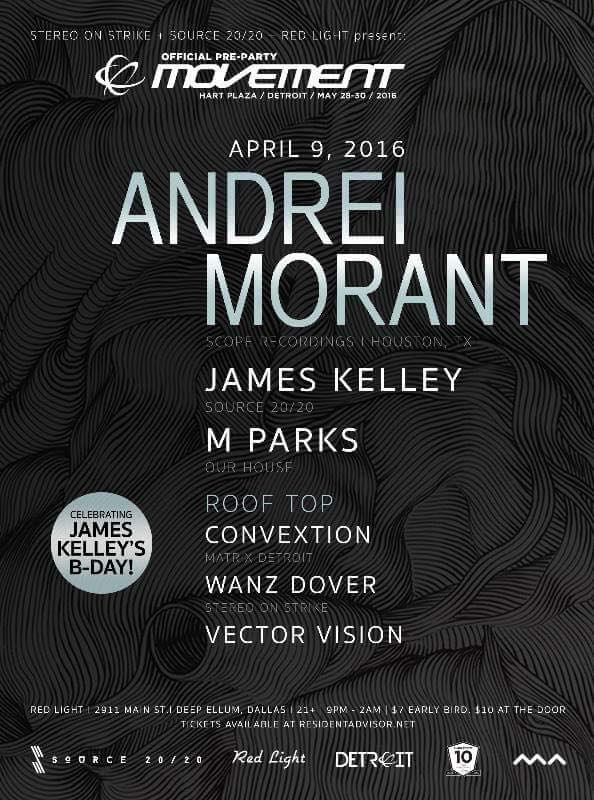